Faced with this problem my phone Sony (sony) z2 xperia quickly began to lose battery power, just a half-day battery fully boarded, and phone basked in the upper part, even in standby mode.

It happened after I installed flush solder micro SD (micro sd) card and move all media files — photos, videos, etc skrinsshoty it. Immediately noticed a bug in the application after you move the camera photo, in the window previously made photo appeared black icon with the image files are missing. And now after taking a display of photographs was incorrect.

Slice after copying media on the SD card, the phone began to warm up and eats the battery right before your eyes just 1% per minute. For half a day on my smartphone android sat down completely.

At first I thought that a hardware glitch, then decided to throw off the phone to factory settings, but unfortunately it did not help, but the most important thing you can do without it does not throw off your device to factory default settings, as the process vosstnovleniya all programs and accounts vashgo phone will take a lot vremni and nerves.

In the end it turned out that the problem is with the media server (see Figure 1), which searches for media content to your phone’s gallery, because the files were and then transfer them to the SD card they are not in place, the server is confused and endlessly through all the folders in search of the lost Medio content. Just such a failure could occur if there were copper broken files on your phone (nedokachannye, spoiled, without a mark on the end of the file). But the most likely is that the gallery android have thumbnails of photos and videos, but own videos and photos not, it gives an error Media Server OS android, which leads to an endless search for missing files, which of course eats up all the battery power of your phone.

Step 1 — You must remove all temporary files stored on your internal memory and SD card. By the time the files are smaller icons and photos for the gallery (temporary files and folders starting from the point of such «/.asdfaDsaF734»).

Step 2 — Insert a file called «.nomedia» in the root of all folders and subfolders that are possible medio files (photos, music, videos, etc).

Step 3 — It is necessary to clean kesh and data in the appendix «Storage Media» on the path «Settings — Applications — All — Storage Media — (erase)».

ALL !!! Your phone SONY Z2 Z3 xperia is restored it will no longer eat fast battery and error with media server solved. 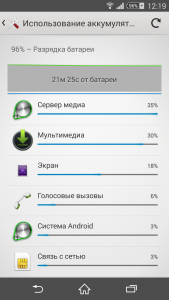